Known Taxi Scams Around the World

Taxis can be one of the most convenient forms of public transport for tourists unfamiliar with the local transportation system. And while most taxi drivers are honest, hardworking members of society, there will always be bad apples in the bushel who won’t think twice about scamming passengers for a quick buck.

In this blog, we’ll go over the most common taxi scams around the world experienced by local and international travellers alike, as well as tips on how not to fall victim to these underhanded schemes.

When you tell your driver your destination and is always most probably your hotel, the driver claims how the hotel has closed down, or they know another place with better rates and services. While some cabbies may be actually telling the truth, this is often not the case.

Some taxi drivers work as secret affiliates to hotels, and they get a commission by taking tourists there. Sometimes their commission is weighed against your tab. The hotels that run this kind of shady operation is often not the best kinds. If you fall for this scheme, you’ll end up staying at a crappy hotel and paying more to cover the taxi driver’s commission.

An easy fix to this is to simply call your hotel. If you don’t have a local SIM card, you can just tell your driver to take you there, regardless of if it’s open or not. Just tell them that you’re supposed to be meeting local friends in that location. Another best practice for tourists, especially international ones, is to use a phone from the airport or the airport’s wi-fi to contact your hotel and let them know that you’re on your way. Some hotels might even start preparing your room as soon as you’ve called to confirm.

Driver has no Change

So, you finally get to your destination and hand your driver a crisp bill. Your driver then scratches their head and starts a story about not being able to break your money. They might even give you a sly smile and get you to make them keep the difference as a friendly tip. Whether you can afford it or not, the issue is that tourists should never give in to scams. This puts passengers into infuriating situations because there’s nothing anyone can do about it, even if the passengers know that the driver’s trying to pull a fast one.

What you can do is look for nearby shops. Take your money back and make the taxi driver wait while you buy something to get your large bills changed. You can even ask for help from your hotel to break your bills. But a better practice would be is to ensure that you have small bills and loose change even before you take a ride.

If you’re coming from an airport, there will be plenty of shops where you can buy snacks and refreshments to get your bigger bills changed. If you’re getting foreign currency, you can request the money changer to put it in a couple of smaller notes.

Because taxis run on metres, when some drivers sense that their passengers are not familiar with the area, they’ll drive around in circles and take the scenic route. This is in hopes to increase the bill and get more out of their passengers.

As a tourist, you can run a navigational app on your phone and tell your driver which roads to take. If your driver’s shady enough, they might make up some story about how some streets are closed, but opening your navigational app is still better than nothing.

If you have no access to local data plans, you can use the wi-fi from the airport to download an offline map of your route before you leave the premises. If you feel that you’re veering off the best course, just try to tell your driver to stick to the map in a friendly but firm tone.

These unmarked vehicles will offer to take you to your destination with the promise of being cheaper. But this is not usually the case. If you take fake taxis, you are more prone to crime, paying an unreasonable flat rate and will have no travel insurance in case of an accident. If situations turn sour, your driver can just leave you then and there, and you won’t be able to do anything about it.

An easy fix is to ask for an official taxi list from the airport or your hotel. If your location has ride-hailing services, like Grab, Lyft or Uber, you’d be better off taking those if taxis are a bit sparse.

Now, this is just plain robbery. Everything’s going well, the metre’s running fine, and you get to your destination without any hassles. But as soon as you pay for your ride, your change is unknowingly a bunch of fake bills.

To not fall for these scams, take the advice of having your bigger bills broken up before your ride. You might have to be given a few coins as change, but those are rarely faked.

It goes like this: when you get to your destination and start paying for your metre, your driver suddenly says that the fare is for each person, which is obviously a ridiculous scam.

To avoid this, take a registered taxi from your airport or hotel and jokingly (to not offend your driver) ask them if the metre is for the whole ride and not per person. Get a verbal agreement that the fare at the end of the trip is for the total taxi ride.

As soon as you start driving off, your driver tells you their taxi metre is broken and starts negotiating for a fixed price. Since this is obviously a scam, your driver will most probably ask for an unreasonable amount.

Suppose you’re not that far off from where you left off. Just tell the driver that you’re getting off and taking another taxi instead. But to avoid this altogether, confirm with your driver if their metre’s working even before they start driving off.

A variation of this is the tampered metres that run higher tariffs than what’s prescribed. It will seem to the clueless passenger that the metre’s running fine, but it’s actually “faster” and will charge a higher rate. There are plenty of taxi fare computations available online, and you can even ask for them from your airport or hotel. Using navigational apps, compute the price per kilometre against the total distance of your trip to get an idea of how much you should actually be paying.

Your driver starts a friendly chat with you to get the conversation going. Then, at the right moment, they mention a couple of shops that tourists flock to, where you can get bargains and such.

In reality, these scammers are getting commissions from purchases made by the passengers they bring over. They can either bring you to gift shops, restaurants and other stores, which aren’t actually offering good deals. Plus, they’ll get to charge you more because of the side trips.

Scammers usually find targets who look clueless and unassertive. Even as a tourist, try to radiate some sort of body language that gives off the impression that you know what you’re doing, but keep it in a friendly way. To avoid these scams, it would always be a good idea to ask your airport for local information, familiarise yourself with the lay of the land, break up your big bills and only take legitimate taxis that your airport or hotel prescribes.

So, the next time you’re going to take a cab from the airport, do your research on taxi fares, bring cash, check the taxi meter for anything suspicious. Better yet, get a secure airport parking spot from Alpha and enjoy the free airport transfer via airport shuttle. You end up saving money and yourself from the stress and headache of possibly dealing with these kinds of scams.


Editor’s Note: This post was originally published in 2015 and has been updated for freshness, accuracy and comprehensiveness. 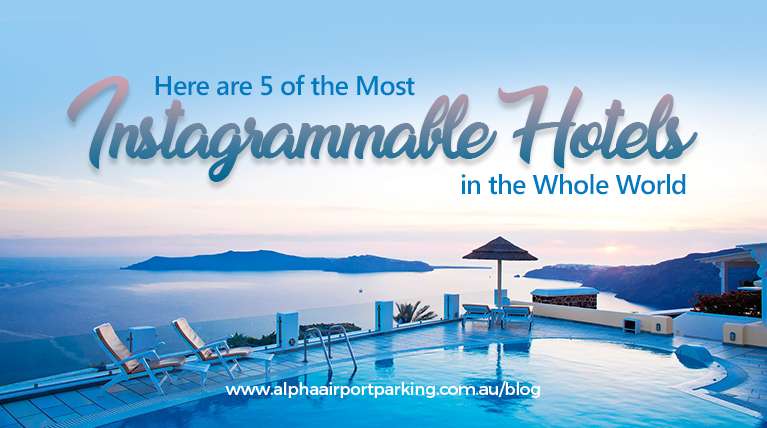 5 Most Instagrammable Hotels in the World